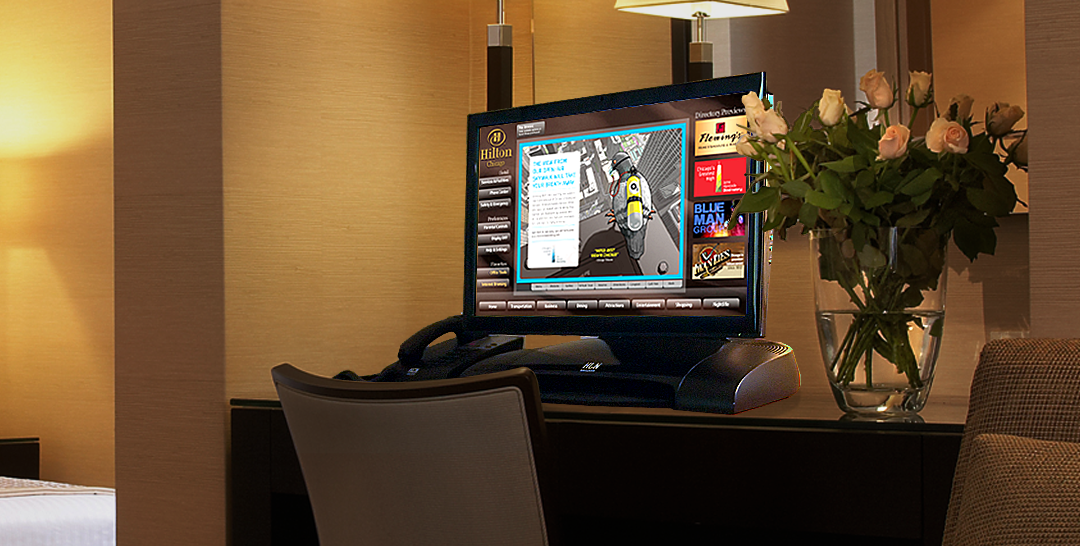 Technology is making it easier for planners to communicate with meeting and convention attendees in their hotel rooms. Here are two systems that use different equipment—one the television, the other a freestanding computer—but allow planners to both keep attendees up-to-date and also generate revenue by selling ads to exhibitors and sponsors.

The Hotel Communication Network
This system is focusing on installing its Navigator program in multiple hotels in one city at a time. The first market is Chicago, where the computer-based system is already available in the Hilton and the InterContinental, and is being installed in the Sheraton Chicago Hotel and Towers. There will be nearly 5,000 units in Chicago by the end of the year, creating what company C.E.O. Kevin Bidner calls “the critical mass to be meaningful for city-wide conventions.”

Navigator operates on a freestanding 22-inch touch-screen monitor that turns itself on each day at 8 a.m. and goes dark at 11 p.m. (users can reactivate it manually). Similar to SmartEvent, the Navigator system is linked to an event’s room block, so a personalized welcome message and event information are on the screen when the guest arrives. Planners can set up the system so guests log in using the same identity used in the event registration process, which will sync the attendee’s personalized schedule, and other information such as announcements, maps, and exhibitors and sponsor information.

“Digital signage can’t be missed,” Bidner said. “If I put this information on a smartphone app, they [attendees] have to download it and they have to use it. If I put it on the dark channel on the TV or a brochure shoved under the door, there is no guarantee anybody is going to see any of that. But if I put it on a 22-inch screen in the room that is on when you walk in, it is unmissable.”

Pricing is based on group size and the options selected. Planners can use the Navigator system to generate revenue by selling ads to exhibitors and sponsors. “It’s measurable results,” Bidner said. “It’s not just how many people see that ad, it’s how many people click on it.”

The Navigator also provides a city guide to dining, shopping, and entertainment, and the ability to connect to those businesses using one click and the attached speakerphone. The system also includes Microsoft Word, Excel, and Powerpoint so that attendees who leave their laptops at home still have a full work station in the room.

This fall the Navigator will add a social networking component that will allow convention attendees in different hotels to create chat rooms and interest groups. The company plans to begin installations in at least two more markets in 2013.